A New Kind of Tech Emphasizes Skills, Not a College Degree – The New York Times 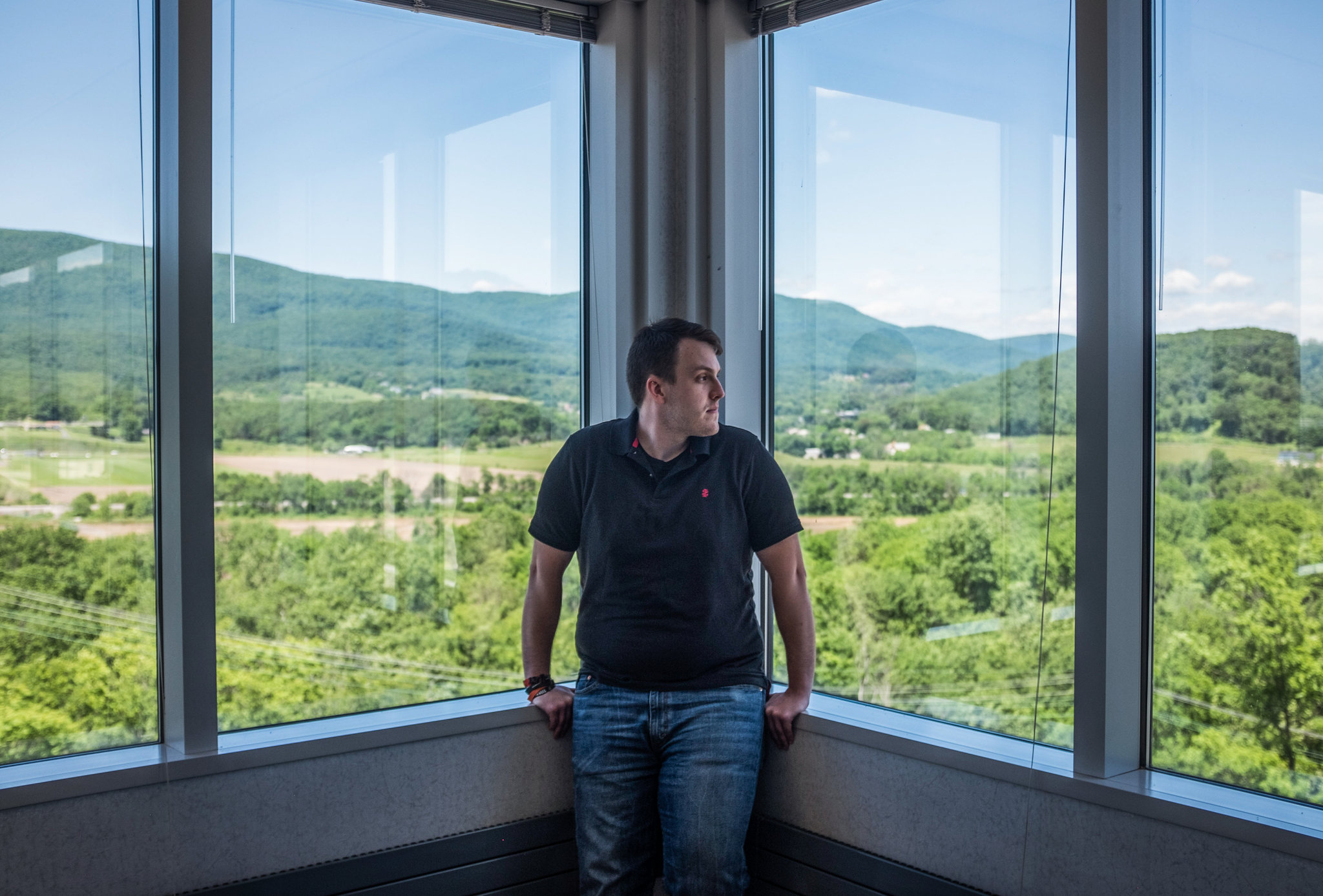 ROCKET CENTER, W.Va.-A few years ago, Sean Bridges lived with his mother, Linda, in Wiley Ford,
W.Va.Their only income was her monthly Social Security disability check. He applied for work at
Walmart and Burger King, but they were not hiring.

Yet while Mr.Bridges had no work history, he had certain skills.He had built and sold some
stripped-down personal computers, and he had studied information technology at a community
college.When Mr.Bridges heard IBM was hiring at a nearby operations center in 2013, he applied and
demonstrated those skills.

Now Mr. Bridges, 25,is a computer security analyst, making $45,000 a year. In a struggling
Appalachian economy, that is enough to provide him with his own apartment, a car, spending
money-and career ambitions.

“I got one big break,” he said.”Thafs what I needed.”
Mr. Bridges represents a new but promising category in the American labor market: people working in
so-called new-collar or middle-skill jobs.As the United States struggles with how to match good
jobs to the two-thirds of adults who do not have a four-year college degree, his experience shows
how a worker’s skills can be
emphasized over traditional hiring filters like college degrees, work history and personal
references. And elevating skills over pedigree creates new pathways to employment and tailored
training and a gateway to the middle class.

This skills-based jobs approach matters at a time when there is a push to improve the
circumstances of those left behind in the American economy, many of whom voted for President Trump.

‘We desperately need to revive a second route to the middle class for people without four-year
college degrees, as manufacturing once was,” said Robert Reich, a labor secretary in the Clinton
administration who is now a professor at the University of California, Berkeley. “We have to move
toward a system that works.”

The skills-based concept is gaining momentum, with nonprofit organizations, schools, state
governments and companies, typically in partnerships, beginning to roll out such efforts. On
Wednesday, the approach received a strong corporate endorsement from Microsoft, which announced a
grant of more than $25 million to help Skillful, a program to foster skills-oriented hiring,
training and education.The
initiative, led by the Markle Foundation, began last year in Colorado, and Microsoft’s grant will
be used to expand it there and move it into other states.

‘We need new approaches, or we’re going to leave more and more people behind in our economy,” said
Brad Smith, president of Microsoft.

It is unclear whether a relative handful of skills-centered initiatives can train large numbers of
people and alter hiring practices broadly. But the skills-based approach has already yielded some
early and encouraging results in the technology industry, which may provide a model for other
industries.

These jobs have taken off in tech for two main reasons. For one, computing skills tend to be well
defined. Writing code, for example, is a specific task, and success or failure can be tested and
measured.At the same time, the demand for tech skills is surging.

One tech project that has expanded rapidly is TechHire, which was created in
2015 and is the flagship program of Opportunity@Work, a nonprofit social
enterprise.TechHire provides grants and expertise to train workers around the country and link them
to jobs by nurturing local networks of job seekers, trainers and companies.

In just two years, TechHire’s network has grown to 72 communities, 237 training organizations and
1,300 employers. It has helped place more than 4,ooo workers in jobs.

TechHire’s mission is partly to chip away at “the cultural hegemony of the bachelor’s degree,” said
Byron Auguste, president of Opportunity@Work.

Nichole Clark of Paintsville, Ky., heard a radio ad last year for TechHire Eastern Kentucky. The
program offered six months of training in software programming that included working with a company
while being paid $400 a week. That was not much less than what Ms. Clark, now 24, was making as a
manager at Pizza Hut.

Without a college degree, Ms. Clark said, her horizons seemed confined to low­ wage jobs in
fast-food restaurants, retail stores or doctors’ offices. The TechHire program, she said, could be
“a doorway to a good-paying job, which is everything here.”

Ms. Clark made it through online screening tests and an interview and got into the
program.TechHire’s role varies, and it often funds training grants, but in this program it
solicited applicants and advised and shared best practices with Interapt, a software development
and consulting company.The training stipends were paid for with a $2.7 million grant from the
Appalachian Regional Commission.

After four months of taking ali-day classes on the basics of writing software and two months of
working in an internship alongside Interapt developers, Ms. Clark was hired by Interapt in May. As
a member of the team that performs software quality assurance and testing, she is now paid more
than $4o,ooo a year, about double what she made at Pizza Hut.

Ms. Clark is growing confident about her employment future. “There are endless roles you can play,
if you have these skills,” she said.
In Colorado, Skillful is working to improve the flow of useful information among job seekers,
employers, educators, governments and local training groups. The organization focuses on jobs in
tech, health care and advanced manufacturing.

Ninety companies have worked with Skillful’s staff and partners to refine and clarify their
descriptions of skills. That data has contributed to an online “training finder” tool -built by
researchers at Linked.In -that shows salary ranges, skills required, training programs and nearby
openings for different occupations. (Microsoft acquired Linkedin, a Skillful partner, last year.)

‘We’re trying to use the very forces that are disrupting the economy – technology and data -to
drive a labor market that helps all Americans,” said Zoe Baird, chief executive of the Markle
Foundation.

Ron Gallegos Jr., 31, has benefited from Skillful’s program. For years, he
worked as a facilities manager overseeing cleaning crews in retail locations. Restless, he wanted
to pursue a tech career.

He had a side gig fixing televisions, gadgets and PCs. But he was self-taught, had no college
degree and needed training and credentials.

So in late 2015, Mr. Gallegos quit his job to study full time to gain training and certifications
as a computer support technician, and later in network security.

At his local community college, Skillful representatives offered tips on job searches, resume
preparation, financial support and networking. At one event, Mr. Gallegos learned of a state grant
available for a security course he wanted to take.

Not content to just look for jobs, Mr. Gallegos created one for himself, setting up Mile High IT
Services last fall. Now he works as a technology-support contractor for small businesses, and his
one-man company is gaining traction, with his income exceeding $so,ooo a year.
“It’s all pretty bright for me now,” he said.
In Rocket Center, where rocket engines were once built and some composite materials for American
fighter jets are manufactured today, IBM occupies a few buildings and employs 350 people, including
Mr. Bridges. They are working on cloud computing, cybersecurity, application development and help
desks.

In the last two years, nearly a third of IBM’s new hires there and in a few other locations have
not had four-year college degrees. IBM has jointly developed curriculums with the local community
college, as well as one-year and two-year courses aligned with the company’s hiring needs.

For companies like IBM, which has 5,000 job openings in the United States, new-collar workers can
help it meet its work force needs -and do it inexpensively if those workers are far away from urban
centers, where the cost of living and prevailing wages are higher.

“It makes sense for our business, for the job candidates and for the communities,” said Sam Ladah,
IBM’s vice president for talent.

The company, which stopped disclosing its American employment in 2007 and regularly cuts jobs in
declining businesses, declined to say whether it was increasing its total domestic work force.

But at the West Virginia center, IBM plans to hire up to 250 people this year, including more like
Mr. Bridges.

“Now, we’re recruiting for skills,” Mr. Ladah said. Follow Steve Lohr on Twitter @SteveLohr.
A version of this article appears in print on June 29, 2017, on Page 81 of the New York edition
with the
headline: ‘Second Route’ To Middle Class.