The American Jewish Committee has 34 offices and ties with 37 Jewish organizations. While fighting anti-Semitism, its new head wants to bring the Jewish world closer together.

NEW YORK — The first-ever female president of the 113-year-old American Jewish Committee (AJC) Harriet Schleifer has a lengthy to-do list. With 34 offices worldwide, plus partnerships with 37 international Jewish community organizations, the global Jewish advocacy group is involved in a myriad of issues, from fighting anti-Semitism to bolstering ties between the American Jewish community and Israel.

“As a child of Holocaust survivors from Poland, Jewish continuity is so much a part of my being. I want to be sure we are always in a position of strength, creating our own destiny. Knowing our history, our tradition is vital to understanding and honoring the past, confronting the challenges we face as Jews today and readying for future tasks,” Schleifer recently told The Times of Israel in AJC’s Manhattan headquarters during a discussion of her vision for the nonprofit.

Schleifer’s experience growing up as a first generation American and second-generation Holocaust survivor have clearly influenced her perspective.

Her parents, Rubin and Frances Partel, arrived in New York City in 1947 to rebuild their shattered lives.

Schleifer’s mother, who had grown up in a religious household in Poland, left her observance behind after her first husband, five brothers and mother were murdered in the Holocaust. Together with a surviving brother, Frances came to the United States. Schleifer’s father, Rubin, was the sole survivor of his family. She said that while he too wasn’t especially observant, he was a decidedly proud Jew.

Her parents infused Schleifer and her sisters with a strong Jewish identity, as well as a sense of resilience and continuity, she said.

Schleifer first got involved in AJC in 2004 when she joined the organization’s Westchester/Fairfield Regional Office. A resident of Chappaqua, New York, she joined AJC’s national Board of Governors in 2007 and has served on the AJC Executive Council since 2013. 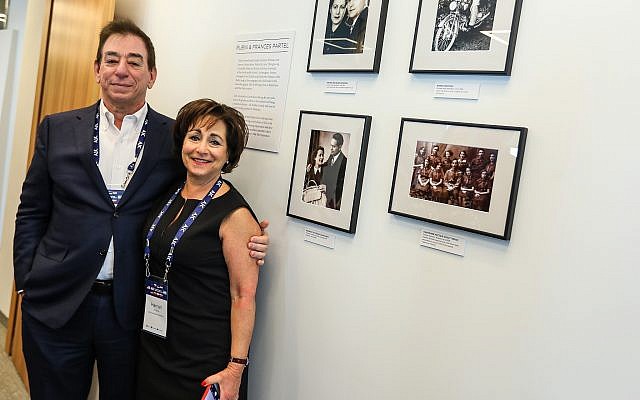 Harriet Schleifer and her husband, Leonard, at the opening of the AJC Central Europe office in Warsaw, in front a wall dedicated to her parents. (Courtesy AJC)

From 2014 to 2016, Schleifer served as chair of Project Interchange, AJC’s educational program that has brought to Israel more than 6,000 leaders from across the US and other countries around the world, and as chair of AJC’s Board of Governors from 2016 to 2019.

“Harriet Schleifer’s passion for the Jewish people, for core American democratic values, for Israel, for Yiddishkeit, combined with her unbounded energy, are distinctive attributes that, under her leadership, will propel AJC’s pioneering work in confronting the many challenges facing Jews in the US, Israel and around the world,” AJC CEO David Harris said, using the Yiddish term for Judaism.

“We have to keep a broad outlook and continue to strengthen ties here and around the world,” she said.

You’re the first woman to head the AJC since its 1906 founding. Talk about the importance of having women in leadership positions in Jewish institutions. Do you think women bring a different perspective to the table?

First and foremost I feel very fortunate to become the first female to lead the AJC. While I recognize no position should ever be decided just on terms of gender, it’s also true that have at least 50 percent of the population, if not more, is female. So we have all this leadership potential out there and by opening up access to leadership positions we’re just going to attract more talent.

With regard to bringing a woman’s point of view to the job, I don’t want to make generalizations. Speaking about myself, I evaluate people as entire packages. Knowing that everyone has relative strengths and deficits, I try to bring in people with varying skills. I like to have a lot of face-to-face interaction. I don’t like to look strictly at paper resumes because I think you miss a lot of the richness a person can have. And paper can hide some of the deficits as well.

What do you consider the most pressing issues facing the AJC here in the US?

Anti-Semitism is high on the priority list for me. I see this issue through a particular lens. My parents were Holocaust survivors. Their stories of loss and outrageous human degradation are so ingrained in me. I’m very sensitive to how this is now rearing its ugly head in this country because we always thought this could never happen here in America.

We can’t compare now to then, it’s not apples to apples. But this is an intolerable situation where we have [anti-Semitic] language, behavior, and cartoons that have hit mainstream life. It’s not in the shadows anymore. It’s bubbling through to the mainstream.

What has been your experience with anti-Semitism?

In my earlier years my parents only socialized with other survivors, so I didn’t feel anti-Semitism. I felt under the yoke of it, but I didn’t feel it leveled toward me. However, then I ventured out. I remember when I was a senior in college, a classmate from Texas, whom I was very close to, said something to me when we said goodbye at the end of the year. She said, “You know what Harriet, Jews are not so bad after all.”

I was flabbergasted. There was something beneath the surface that just found its way into her dialogue with me. Over the years there were other comments. Someone had too much to drink one time and said something, or someone said something, because they saw I was wearing a Jewish star.

Today, to see something [such as the April cartoon] in the New York Times, that’s a total worry. That’s an order of magnitude that I never thought I would see. I don’t want that to become acceptable and commonplace. Now, I know that the Times retracted it, but the fact that it was put to print is utterly disturbing. 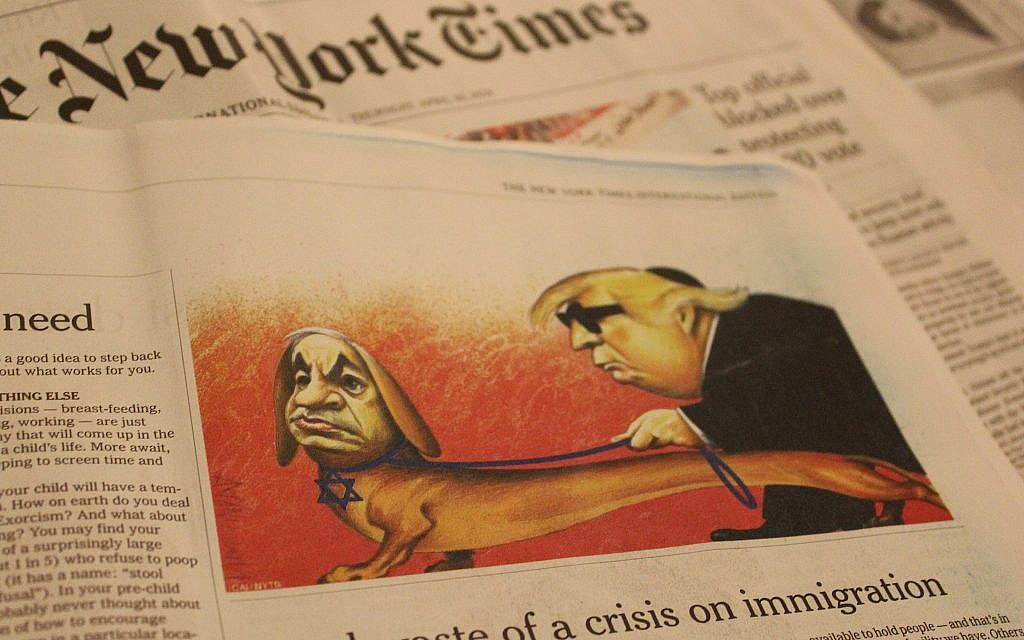 What are the most pressing issues facing AJC abroad?

We’re trying to bring together coalitions of people who can work together for a common cause, for democratic values, for fighting against bigotry and anti-Semitism. Our mission for building bridges comes from a Jewish lens, but we really are trying to maintain civility and human rights in all countries. We have a broader outlook than just defending Jews. Of course that’s where we focus so much of our energy, but it’s not exclusive to only protecting Jews.

Can you speak about how AJC continues to hold the line on bipartisanship at this fractious time in the US, where even when it comes to condemning anti-Semitism people seem to fall along party lines?

We open doors to everybody and we pride ourselves on that. Before we start meetings we announce we’re a 501(c) (3) [nonprofit] to remind everyone that we are not political. We work with policy and platform and not individuals. We are happy to be, and interested in, working with people of all political persuasions. We don’t distinguish; we don’t boo one side or another. We will reach out to any political office that is interested in having a formative dialogue with us.

Is it harder now to get people of different parties together in the same room?

If you just look at how the government functions, they have a hard enough time getting each other in the same room! We’ll work the hardest we can to bring people together – even if it means meeting with individuals one at a time. If that’s what we have to do then that’s what we will do.

Tell us a bit about how your parents’ experiences and how their resilience shaped your sense of justice and desire to nurture others.

It’s very funny because as many atrocities as I heard about starting at a very young age, I remember how one day my mother blurted out — and she was really scarred — “You know, life can be so beautiful.” I was stunned that you could still have that spark of life despite the losses. And a light bulb went off. I remember thinking you don’t have to be crippled by this.

As far as nurture goes, as an individual I’ve always noticed the person sitting in the corner. It always hurt me to see people in the corner. How much of repairing the world is because of the lessons that I learned or how much is just who I am? I wouldn’t be able to tease that apart and I’m not interested in teasing that apart. I think the lesson you learn is: humans are made in the image of God. If you’re left out in the cold, then someone should give you a hand and bring you into the light. That’s how I look at the whole world.

How would you describe your level of observance?

Personally I am an observant person. I keep a kosher home; I eat everything out. I must say, treif [not kosher food] is on the outside — but my home is my castle. I comfortably make this distinction. It also means I have a very inclusive home because anyone can eat at my home; a very observant Jew or observant Muslim can eat at my home.

I am also a big shul[synagogue] goer. I love going to shul. It’s my community. It’s like an oasis in time; it takes you away from everything.

In a past interview you spoke about how American Jews and Israeli Jews don’t understand each other, that they are uneducated about each other. What did you mean?

I believe most Israelis don’t understand the expression of Judaism in this country. I don’t think the Rabbinate is aware that 90 percent of Jews in this country are not Orthodox. Perhaps they think we’re all assimilated and don’t practice Judaism, which is not the case. I think they have to learn about our sensibilities. Most Israelis don’t care about going to the Western Wall. Yet, this has become a huge issue for American Jews.

I think most American Jews think Israelis have as an easy a life as we do. They don’t, at least not the Jews living in harm’s way in places like Sderot.

We have different life experiences. We need to understand what makes Israelis tick, what pushes their buttons and what their priorities are. Until we sit down and really understand each other more deeply, we’re going to have people who may become disinterested about Israel. That is a huge fear for me.

So how do you remedy this?

I think one step could be additional college education about Israel, the nuances and complexities of life there. We also know that kids who go to Jewish sleep-away camp, or participate in other Jewish institutions, have an ingrained identification with Israel. It’s my hope more American Jews will take advantage of those kinds of placements.

Do you think American Jews take Israel for granted?

I think we’ve grown up comfortable. We’ve achieved a lot of success here in our professional careers, you can belong to country clubs that once wouldn’t take you, and other places that once wouldn’t take you. This has been the best age for Jews we’ve experienced and we’re able to broaden our interests and bring our values to the many universal issues that have captured our imagination. That’s a positive thing.

I think younger people today feel their community is broader than just Jews, and that’s wonderful. It’s wonderful that we are so connected and so successful. However, I think some of that comfort has let us fall down a bit. On the one hand we’re a global world, but on the other hand we can’t forget our roots.

Do you think we’ve gotten too comfortable as American Jews?