For Many Girls, Figure Skating Loses Its Edge to Hockey – A surge in girls’ ice hockey comes as many embrace competitive team sport, spurning the makeup and sequins associated with figure skating 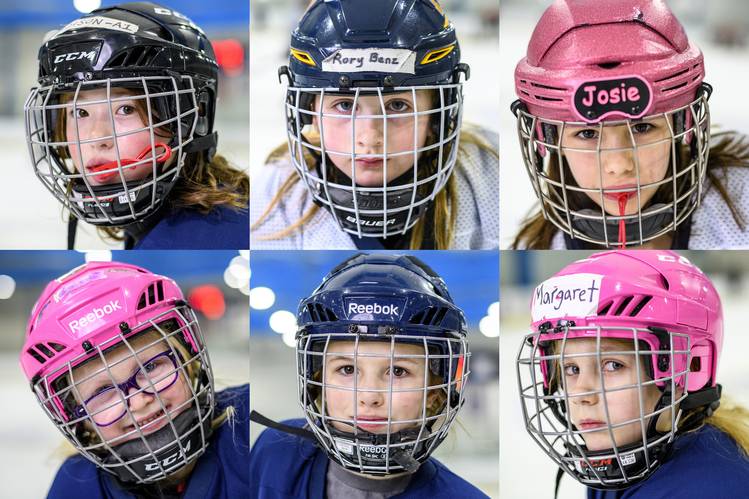 On a recent Saturday morning, 8-year-old Sara Caldicott tied her skates, left foot first, then right, sitting on a bench at the Rockville Ice Arena in Maryland. But instead of spandex and sequins, she wore shin guards and a helmet.

Like a growing number of girls her age, Sara has chosen ice hockey as her sport.

Traditionally the domain of body-checking, jaw-smashing males, ice hockey has seen a surge in girls’ participation in recent years. Girls’ enrollment has grown 25% from five years ago, and doubled since 2000, with about 61,000 girls 18 and under playing in the 2017-18 season, according to USA Hockey, the governing membership organization. That outpaces growth in boys’ participation, which is still larger than girls’ at around 322,000, but has declined slightly since 2000.

One reason: Young girls have seen their grown-up counterparts shine on the ice, as the American women’s team won the 2018 gold medal against Canada at the Winter Olympics. At the recent NHL All-Star Skills Competition, Olympian Kendall Coyne Schofield competed in the Fastest Skater event, the first woman to do so.

The sport is also riding a wave of female empowerment that has taken hold across the U.S., manifested in the #MeToo movement, and tapped by marketers such as Nike, narrating themes of breaking into male-dominated sports.

“The popularity of girls hockey has taken off, and I think a lot of that has to do with role modeling,” says Scott Hamilton, longtime figure skating analyst and 1984 Olympic champion, who now runs a skating academy in Antioch, Tenn.

Some rink operators and coaches say more girls are choosing ice hockey over figure skating. At the Detroit Skating Club in Bloomfield Hills, Mich., a typical after-school practice session now has about 15 skaters on the ice compared with 26 five years ago, says Jerod Swallow, managing director. “We’re losing a lot of young ladies to hockey,” he says. The draw of team sports and scholarship potential is part of it. “Not every young lady wants to be an ice princess.”

Sara’s mother, Lesley Caldicott, a 49-year-old stay-at-home mom in Chevy Chase, Md., enrolled Sara in figure skating classes when she was 5. One afternoon after class, they went to watch a figure skating competition happening at the same rink. Sara balked. “They were in their outfits and the makeup,” recalls Ms. Caldicott. “Sara turned to me and said, ‘I’m never going to wear a dress like that.’” Shortly after, she switched to hockey. Newspaper clippings featuring women’s hockey often hang in her room.

USA Hockey has taken steps that make the sport more palatable to parents—of both boys and girls—concerned about injury, particularly as fears about head injury have become a worry across many sports including football and soccer. In the 2011-12 season, the organization raised the age of legal body checking to the Bantam level (ages 13-14) from the Pee Wee level (ages 11-12). A spokesman said the move was intended to keep the focus on fun and skill development, rather than an explicit response to head-injury concerns, which he said were generally not viewed as a barrier to joining the sport.

Figure skating had long been the pathway for girls interested in skating. But the U.S. hasn’t had a men’s or women’s Olympic champion since Sarah Hughes in 2002 and Evan Lysacek in 2010. Critics say its international judging system is tough on athletes and hard for audiences to follow. TV ratings for the women’s primetime final at last year’s Winter Olympics fell from 2014. (An NBC Sports spokesman says the numbers don’t capture the growing number of viewers who watched the event through live streaming and on cable.)

U.S. Figure Skating, the governing body for the sport, says it couldn’t provide numbers for youth participation, though it says membership that includes adults is rising. Enrollments in Learn to Skate programs for children starting at age 3 have grown 25% in the last five years, says U.S. Figure Skating senior director of membership Susi Wehrli McLaughlin, though some skaters choose to go into hockey. “We have a very strong future,” says Ms. McLaughlin.

Marc Fenczak, an ice dancing coach in Lake Placid, N.Y., says he is seeing less interest in summer figure-skating, which traditionally was when many coaches earned most of their annual income, as skaters train intensively between school sessions and before the start of a new competitive season. Last summer, Mr. Fenczak says he earned $6,000, down from a peak of about $30,000 in the summer of 2011. “I used to be able to live all winter on my summer money,” he says. “I can’t do that now.”

Outside Pittsburgh, the UPMC Lemieux Sports Complex, the main practice and training facility for the Pittsburgh Penguins, decided not to offer figure skating when it opened in 2015. “To have three figure skaters on the ice when you could have 40 kids on the ice, from a business-model perspective, made more sense,” says Rich Hixon, vice president of facilities.

Ice hockey is one of the latest previously male-dominated sports to see rising female participation, stretching back to the 1972 passage of Title IX, the anti-gender-discrimination law. Over the next several decades, girls flocked to sports including soccer, basketball, and track and field. 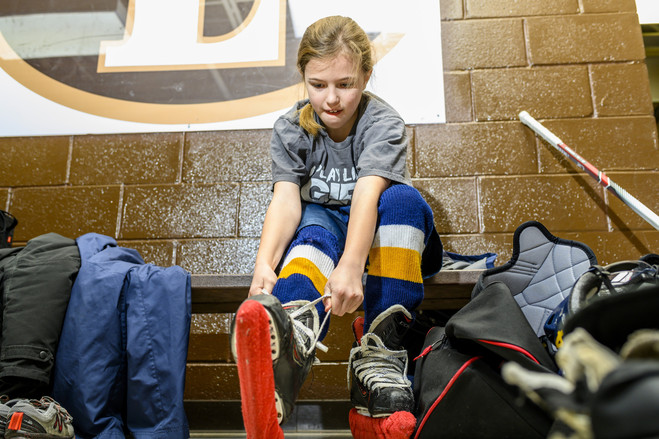 Sara Caldicott suits up in her goalie gear before practice. PHOTO: MATT ROTH FOR THE WALL STREET JOURNAL

Ice hockey remained more male-dominated until more recently. Interest began to pick up after women’s ice hockey debuted at the Olympics in 1998 and the U.S. brought home gold. Four years later, the number of NCAA teams had grown 75% to 70. But youth participation remained relatively small.

Casey Handrahan, assistant coach of the women’s ice hockey team at the University of Connecticut, says the pool of female talent has deepened: “The middle of the pack has gotten better. The entire game has gotten better.”

Sara Caldicott, the 8-year-old in Maryland, says she likes the support she gets from her teammates. At a recent girls’ tournament, she got hugs from her friends at the end of a winning game. “It makes me feel confident,” she says. 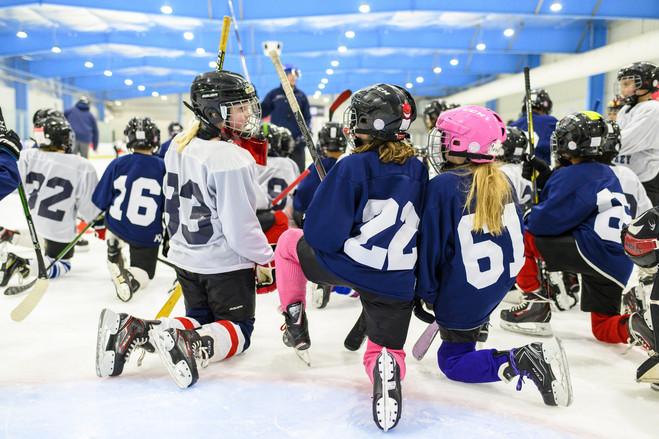