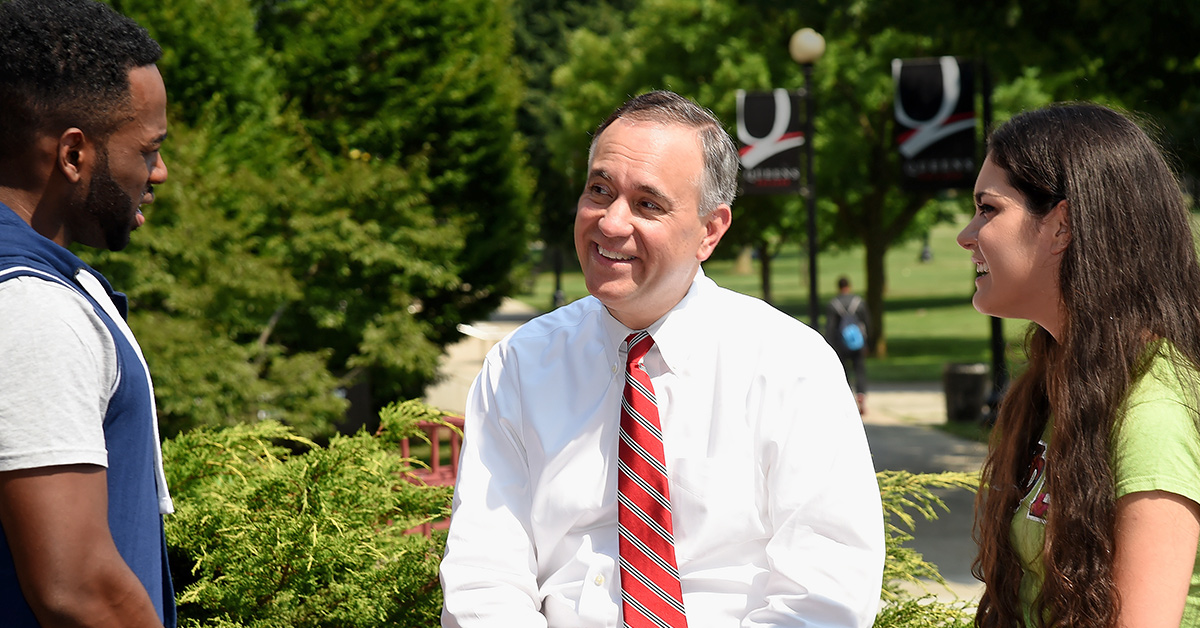 The Board of Trustees of The City University of New York will vote Wednesday to appoint Félix V. Matos Rodríguez, an accomplished scholar, teacher, administrator and public servant who has been president of Queens College since 2014, as the eighth Chancellor of CUNY. He will be both the first Latino and minority educator to head the University. He will assume the post May 1.

An innovative leader, Chancellor-designate Matos Rodríguez, 56, has drawn national recognition as a trailblazer in higher education. He enhanced Queens College’s reputation for excellence and propelled the school to the highest echelon in college social-mobility rankings. As president of CUNY’s Eugenio María de Hostos Community College, the post he held immediately prior to his appointment at Queens College, he gained acclaim for engineering a double-digit increase in the school’s retention rate, leading Hostos to become a finalist for the prestigious Aspen Best Community College prize in 2015. He is one of a select few U.S. educators who has served as president of both a baccalaureate and community college.

“The appointment of Félix Matos Rodríguez as Chancellor marks the onset of a historic chapter in the narrative of this vital institution, one in which every member of the CUNY community should rejoice,” said William C. Thompson Jr., Chair of the CUNY Board of Trustees and leader of the Chancellor Search Committee. “In word and deed, Chancellor-designate Matos Rodríguez embodies CUNY’s mission-driven spirit. Felo’s deep roots in CUNY, combined with his rich experience as a scholar and as leader of both senior and community colleges, make him uniquely suited to lead the University forward, keeping it positioned as the standard-bearer for quality and access in public higher education. Over the course of our thorough search for a Chancellor, we came to consider several serious candidates among a stellar field of accomplished leaders, but we kept coming back to Felo. His sterling credentials, his unparalleled depth of perspective and his demonstrated commitment to CUNY made him the inarguable standout and the obvious choice. It fills me with great pride to have been a part of this pivotal decision and to be able to announce that the nation’s greatest urban university is making history with one of its own.”

“This would be an extraordinary opportunity for anyone who is passionate about the role CUNY plays in the lifeblood of the world’s greatest and most important city,” said Matos Rodríguez. “For me, this appointment is particularly special because CUNY is home. I am immensely proud to have risen through the University’s ranks and am deeply honored to now have the opportunity to lead an institution I love and treasure. I will strive every day that I am Chancellor to fulfill the promise of our noble mission to afford academic excellence and economic opportunity to all. And I will endeavor to elevate to new heights CUNY’s legacy as the paradigm of a people’s University.”

Currently the board chair of the Hispanic Association of Colleges and Universities (HACU), Matos Rodríguez has used his extensive regional and national networks and board memberships to advance Queens College’s visibility and recognition. He is a member of the Council on Foreign Relations and an Aspen Institute Ascend Fellow. He currently serves on the boards of Phipps Houses, the United Way of New York City, the TIAA Hispanic Advisory Council and the Research Alliance for New York City Schools.

Since Matos Rodríguez took office as the 10th president of Queens College, in August 2014, the school has been recognized for its success at propelling students into the middle class. A 2016 study by the Equality of Opportunity Project ranked Queens College in the top 1 percent of all colleges in moving students from the bottom fifth to the top fifth of the country’s income distribution, and The Chronicle of Higher Education in August 2018 ranked the school 11th of all U.S. colleges for upward social and economic mobility.

Matos Rodríguez has been an aggressive fundraiser; during his tenure, the Queens College Foundation has nearly doubled in value. He spurred the college’s first systematic review of all graduate programs, and the development of an accelerated B.A./M.A. program to encourage more undergraduates to pursue graduate studies.

As he led Queens College, Matos Rodríguez also pushed to increase diversity college-wide. Nearly half of the current members of the college’s Cabinet are people of color, a marked change from its composition when he was appointed. Under his Presidential Hiring Initiative, 48 percent of faculty hires have been from underrepresented groups.

At Hostos, where he served as president from 2009 to 2014, Matos Rodríguez achieved dramatic improvements in student performance, and doubled the college’s fundraising intake. The fall-to-fall retention rate increased to 68 percent from 57 percent during his tenure, the first time in the college’s history that it recorded five consecutive years of increased retention, and the school’s graduation rate increased to 28 percent from 22 percent. His efforts made Hostos a finalist for the prestigious Aspen Best Community College prize in 2015.

Matos Rodríguez left CUNY for several years in 2005, returning to his native Puerto Rico where he worked one year as head adviser on Health and Social Welfare to the governor of Puerto Rico. In 2006, he was named Secretary of the Department of Family Services, a post he held for nearly two years in which he managed an annual budget of $2.3 billion and oversaw nearly 11,000 employees across 104 regional offices.

From 2000 to 2005, Matos Rodríguez was director of the Center for Puerto Rican Studies at Hunter College (El Centro), and he was also a tenured professor of Black and Puerto Rican/Latino Studies. He previously taught at Northeastern University, Boston College and the Universidad Interamericana-Recinto Metropolitano, Puerto Rico.

The appointment follows the recommendation of a 14-member search committee of CUNY trustees, college presidents, faculty, students and civic leaders led by Chairman Thompson. The committee was assisted in its search by Isaacson Miller, a leading executive search firm.

The City University of New York is the nation’s leading urban public university. Founded in 1847, CUNY counts 13 Nobel Prize and 24 MacArthur (“Genius”) grant winners among its alumni. CUNY students, alumni and faculty have garnered scores of other prestigious honors over the years in recognition of historic contributions to the advancement of the sciences, business, the arts and myriad other fields. The University comprises 25 institutions: 11 senior colleges, seven community colleges, William E. Macaulay Honors College at CUNY, CUNY Graduate Center, Craig Newmark Graduate School of Journalism at CUNY, CUNY School of Labor and Urban Studies, CUNY School of Law, CUNY School of Professional Studies and CUNY Graduate School of Public Health and Health Policy. The University serves more than 275,000 degree-seeking students. CUNY offers online baccalaureate and master’s degrees through the School of Professional Studies.